Forty-one per cent of people globally see climate change as a ‘very serious threat’ to their country, with 28 per cent being “somewhat concerned”.  This compares to 13 per cent who say climate change is not a threat at all, and nearly one in five people worldwide with no opinion or awareness of the issue.

Although many people are aware of the risk, levels of scepticism and indifference are particularly high in the world’s biggest producers of climate changing emissions. Globally, the poll found that 22 per cent of people had experienced severe weather, and 53 per cent of these rate climate change as a very serious threat. Where a person lives also had a significant impact on their response. Some neighbouring countries had very different perspectives on climate change, and the poll findings suggest that other factors, such as education and politicization of the debate about climate change, may also be factors. In South Africa 59 per cent of people thought climate change was a very serious risk, whereas in neighbouring Lesotho it was 78 per cent, Zimbabwe 59 per cent, Namibia 65 per cent, and Mozambique 40 per cent.

In southern European countries, the proportion of people who think that climate change is a very serious threat is much higher than many of the northern countries in the region. Spain, Portugal and Greece are all above 80 per cent, Cyprus 77 per cent, Italy 67 per cent and Malta 60 per cent. France, Germany, Belgium, Netherlands, Denmark, Sweden, Norway and Finland all had much lower percentages of people who think it is a serious threat, though concern in Austria, the UK and Ireland is high on this measure.

How much of a threat is Climate change? It matters that we have these conversations about risk with our communities. For example, in our community the rainfall patterns have changed so we need to plant different crops that grow quicker and adapt to these new conditions.

Some of the world’s largest economies stand out for their relatively high levels of scepticism. In the USA, which is the second biggest carbon emitter in the world, 21 per cent of people see climate change as “not a threat at all”. The USA has the highest percentage of climate change sceptics among high income countries. People in China, which is the world largest producer of carbon, are also less concerned about climate change, with just 23 per cent seeing it as a very serious threat, compared with 29 per cent who have no opinion and 12 per cent who feel climate change is not a threat. Levels of doubt in India, the world’s third biggest carbon emitter, are similar to America, with 19 per cent denying that climate change is a risk.

The countries recording the highest levels of no opinion about climate change as a risk are Laos at 54 per cent, Nepal at 46 per cent and Cambodia at 42 per cent. 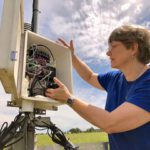 Countries that worry the most about climate change

People across the world who said they saw climate change as a very serious threat to their country in the next 20 years. (% of each country’s population) When we have storm winds, you see we are living in the shacks so the wind when it is too strong it takes off our shacks. If my neighbor’s shack has went away with the wind, we wake up and go help them.

It’s something very powerful, emotionally and physically, it was a big loss economically, you lose everything. It’s the powerlessness of watching the water rising inside your house and you can’t do anything. You watch the water rising, how it’s flooding everything, and you just have to wait.